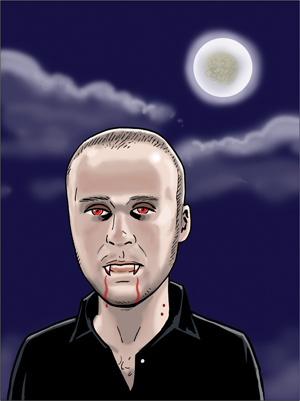 I’m a comic artist and graphic novelist with over twenty years of experience working for UK and US publishers, including 2000AD, DC Comics, Dark Horse Comics and many more.

I studied illustration at Brighton Polytechnic in the 80s and drew my first comics for Escape magazine, before starting my own magazine Velocity with my co-writer brother Gary. As well as the publishers listed above, I’ve worked for a wide range of publishers and organisations including The Horrible Histories magazine, Unicef and The Who Cares Trust.

In 2010, I graduated with an MA in Digital Media Arts from The University of Brighton.

Recent projects have included work in anthologies Ctrl. Alt. Shift Unmasks Corruption, Nelson by Blank Slate Books and the Respect: International Comics project in Russia, as well as my Montague Terrace interactive installations at The University of Brighton and The Hyper Comics exhibition at The Pump House Gallery in Battersea Park, London.

I take a lot of inspiration from old films as well as from the worlds of art, music and literature. I also like piña coladas, getting caught in the rain etc, etc.